Sign in
What can we help you find?
To help our communities during this time, we've suspended disconnections until at least 5/1.
Learn more

Keeping communities safe one service line at a time 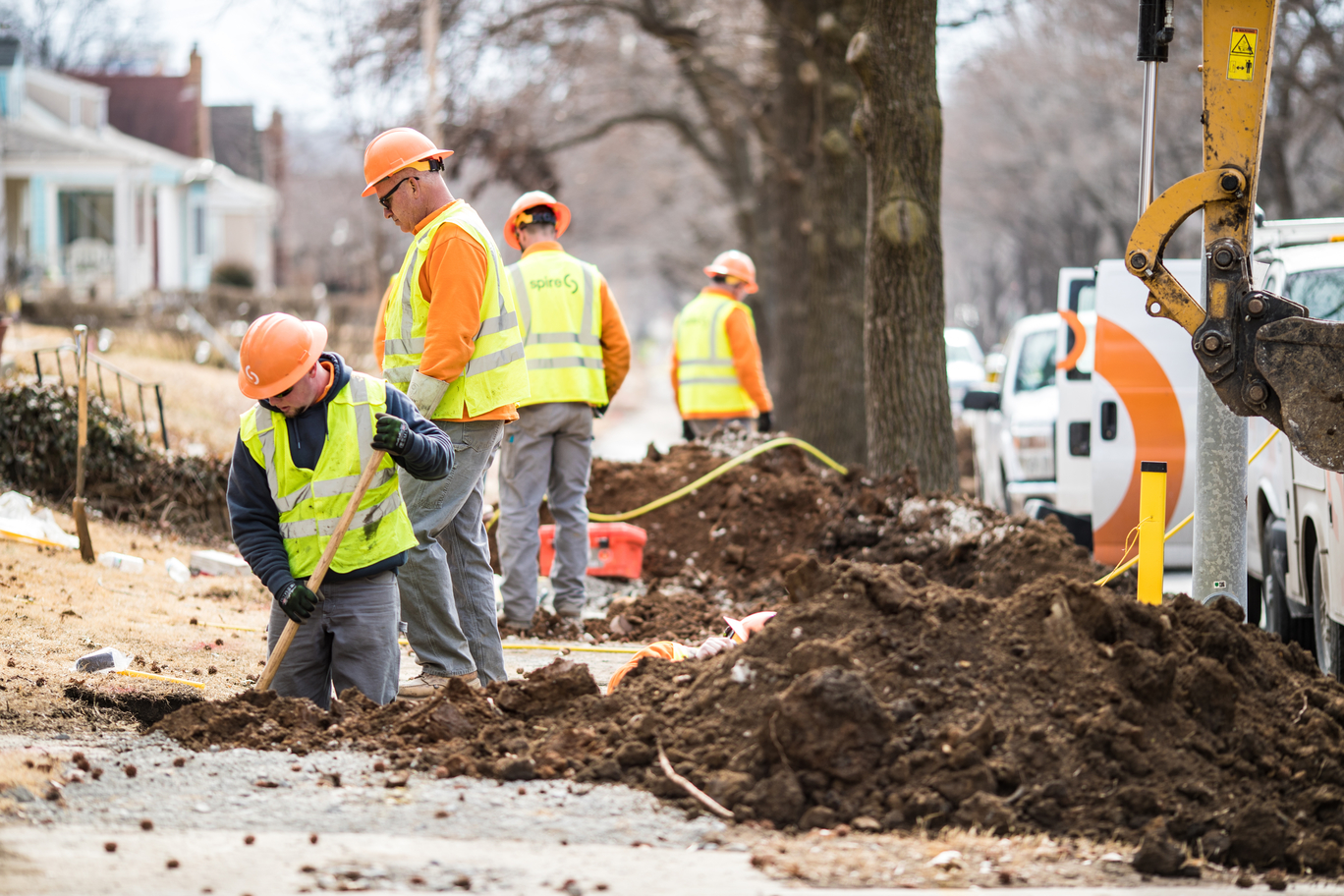 It’s 7:45 a.m., and much of Kansas City is still getting ready for the day. But Jon Street and his crew already have mud on their boots.

They’re trying to locate an underground gas service line, and even though they’re using shovels and a backhoe, it’s incredibly delicate work.

Dig too quickly or lose concentration for a moment, and you might hit a water line, cause a gas leak, hit a data cable or damage a power line. They’re also dealing with frigid temperatures, a busy street and a large tree with its roots crisscrossing beneath the ground. But Jon, the working foreman responsible for the execution of this project, is completely calm as he explains why they’re digging.

“We’re connecting the service lines that bring natural gas to the homes on this block to the new plastic main.”

That’s what Jon and his crew have been doing for the last six months, and in that time, they’ve really gotten to know each other.

“You spend more time with these guys than your own family, it seems like,” Jon said. “You’ve got to be able to have some fun—joke around a little bit.”

And Jon takes that philosophy to heart. He leads his crew more like a sports team or a band of brothers. They work hard while constantly ribbing each other. As they dig deeper, the jokes fly, and there’s an unspoken score being kept.

And yet, as they finish hammering pipe through a difficult wall of mud, a guy holds out his hand, and the other, just like a brother would, helps him up without a word. You can tell it’s not the first time.

“These are good guys. And I don’t ask them to do anything I wouldn’t do myself.”

Jon keeps busy. His crew is digging in multiple spots, and he directs when needed, answers questions when they come up and often jumps in the hole to help.

“These are good guys. I know I can run to go get supplies and they’ll carry out the job just like they’re supposed to,” he said, as another Spire truck drives by honking and waving. “And I don’t ask them to do anything I wouldn’t do myself.”

Jon steps back to take a phone call. He’s responsible for coordinating with the property owners on the block. He has to make contact with them, and often needs access to their homes. This particular situation is a tough one.

“A few homes down we’ve got an elderly woman who owns the property but lives in a senior home a few blocks way,” he explained. “She doesn’t have a car, so she said she’ll walk over, but it will take her about 30 minutes with her walker. It’s too cold for that, so we paid for a cab for her.”

Jon loves that part of his job—meeting new people, keeping their homes warm and being out in the community.

“I love being outdoors, and I love that there’s always something different. We meet a lot of characters out here,” he said.

After a complicated morning of digging, they’ve found the service line, and it’s time for lunch. Jon heads to his truck to stay warm.

“I eat the same thing every day,” Jon said, cracking a grin as he details his daily lunch. “Bologna, American cheese and white bread. Hey, I’d love if it was fried bologna, but this’ll do.”

He knows it’s funny that he eats the same thing every day, and he laughed as he said it.

After lunch, the street rolls back to life. There are multiple Spire crews up and down the block and all throughout the neighborhood, and in a few hours, many of them will head home. But Jon’s crew still has a lot of day left.

“We work late when the weather is good like this. We have to take advantage of it.”

When it rains or is too cold, Jon keeps the crew busy. From cleaning equipment to building storage shelves for their mobile unit, they maximize bad weather days to the best of their ability.

But even though they’re staying late today, no one complains. They enjoy being around each other. It’s hard work, but despite all of the challenges a gas worker may face on any given day, they keep coming back for more.

21 and Hungry for More

Spire's partnership with technical and trade schools leads to lifelong careers for graduates.
Fuel for Good

Beyond the Boots: Grady Windham

Meet Grady. He's served Birmingham as a Spire service technician for nearly 29 years. There's no place he'd rather call home, and he touches every life he meets with kindness and respect. Watch now.
Fuel for Good

How to make the perfect pie crust.
Education
Fuel for Good